You are here: Home › Fluorspar School › Our Community › Chant a prayer for the KCPE class of 2014

The 2014 Prayer Day, a revered annual event, dawned on the bright morning of 24th October, 2014.The Guest of Honour was none other than Mr. Nicolas Ndege, the Deputy Principal of Alliance High school ,a renowned National school in Kenya flanked by Mr. Stephen Muange, the Chaplain of the same school. Readily available to usher them into our school were the School Scouts who mounted a guard of honour.

A quick visit of the school facility Library, ICT lab, classrooms, dormitories & Taekwondo hall where they were treated to a short demonstration gave the guests a feel of Fluorspar School, our home away from home. They commended the standard of the facilities and the stride the institution has made in embracing technology.

The` techno wizards’ as the candidates refer to themselves-thanks to e-learning in our school, sat attentively to catch every moment when the ceremony finally began.

In attendance were members of the management led by Mr. Nico Spangenberg, in his capacity as the
Managing Director of KFC and the School’s B.O.G Chairman. Standing with the KCPE class of 2014 in prayer on this auspicious occasion were members of the B.O.G, PTA, School staff, parents and pupils-The closely knit Fluorspar family!
The Managing Director, in his fatherly counsel wished the candidates well and encouraged them to face the exam positively and trust in God. He thanked the Guests for honoring the invitation.

Mr. Ndege’s speech left the candidates inspired and confident to face the all important examination in their lives. Emphasis was put on pupils embracing proper study skills, discipline, creativity, resilience, passion in academics not forgetting pursuing their goals. `Never, never, never give up,’ he quipped. He urged parents to avoid abdication of their duty in bringing up children.
With a lot of humour coupled with illustration, the Chaplain Mr. Muange, gave his sermon based on Isaiah 61: 7 and Proverbs 22: 6 emphasizing on obedience to instruction, putting into practice what we learn and embracing spiritual matters and being responsible teens. With all said and done and in one spirit, a prayer for victory for the candidates was made to Our Father on High lead by Mr. Muange. 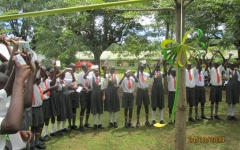 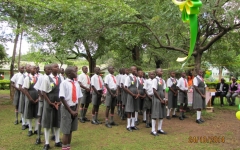 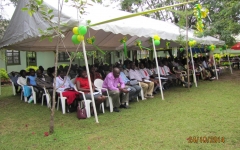 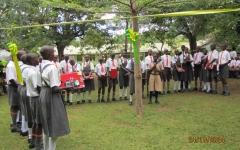 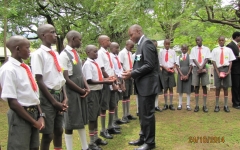