You are here: Home › Our Community › First Taekwondo Competition for Champion Taekwondo

A team of ten senior men students split into two teams of 5 each were selected by the instructor, Master Euh, to take part in this debut team event, eight of whom were orange belt and two yellow belt. The team was also accompanied by children of the Taekwondo centre with an aim of giving them an opportunity to get exposed to a competitive environment.

As expected there was a lot of anxiety and nervousness considering that this was their first competition and experience of competitive participation. This was however quickly quelled when Team B that began the competition won their match 50–30 and proceeded to the quarter finals. Team A participated in the next match against the Kenyan Olympic black belt team and put up a spirited fight. They however lost the match by 36-50. Finally, Team B met with Nyanza Taekwondo Club, the eventual winners , in a tight match that they lost 45-46..

Even though they did not win any medals, the Champion Taekwondo team showed that they have potential and were a future force to be reckoned with as they performed admirably considering that this was their first major competitive event within 18 months of starting the sport. 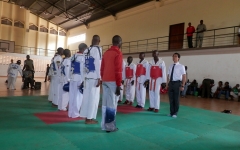 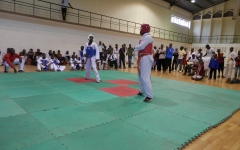 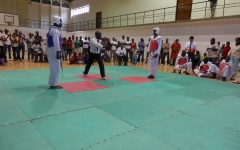 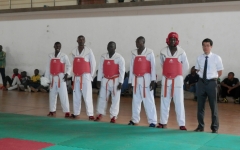